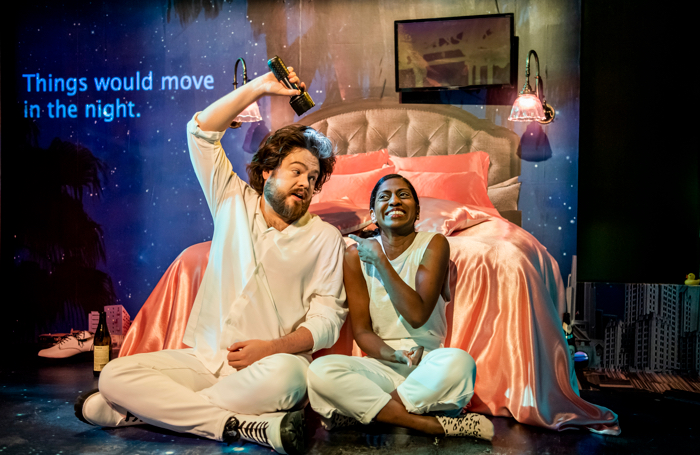 “Eve Leigh takes you from Poland to Korea, LA to India and leaves you kissing a stranger in your car”!

Oh, how I love the Royal Court! I had been feared to ever return after my first visit to see the play Goats by Liwaa Yazji. After taking the leap of faith, I returned to eventually come to the fact that I practically. Live. Here. Located in Splashy Sloane Square; With it’s industrial style interiors and their marvellous Samuel French bookshop, this not-for-profit Theatre is the ultimate place to go for new and emerging writing, great wine and to hunt for your next monthly read at book club. My favourite shows are put on in the Jerwood upstairs like this one! Today I’ll be reviewing ‘Midnight Movie’ directed by Rachel Bagshaw.

This play is a multi-sensory, episodic experience that puts your eyes to work. From spoken word to sign language, tingling captions and layers of sound. With crawling ants scattering the stage, this storytelling moment brings alive your whole body like you never thought Theatre could before.

I am welcomed into the auditorium with themes of Cuban music, rubber ducks and live instruments. I feel I have entered a 1980’s apartment, rented by two fashion stylists rather than the two avatars (Actors Tom Penn & Nadia Nadarajah). The set is shadowed by a large projection of static. The play began and I immediately entered a multiplayer game.

Midnight Movie presents you with two avatars that take you inside the internet. On a baffling journey, opening up numerous tabs, chatrooms, horror stories, and moments only the ‘digital body’ can witness. Director Eve Leighs experimental writing and Bagshaw’ brilliant vision makes you indulge into the anonymity of the dark web and will take you from one place to a multi-universe.

The play is accessible to all. All shows running are a relaxed performance. Allowing you to leave the space whenever needed. The performance is also Captioned, Audio Described and uses British Sign Language. The director even brings the play home to those who can’t make it to the Theatre (check out www.royalcourttheatre.com for further information). What I love about this is that the play is welcome to all and truly creates a magical theatrical experience that will be different for each and every audience member.

As much as I want to go into detail what this play is exactly about; from beginning, middle and end. I just can’t as there is no real structure to the storyline. It completely breaks down conventions, made me feel exposed and really questioned whether I should delete my Facebook account!
If you are someone who wants to know what’s going on by the second, this may not work for you. Midnight movie is a play where you need to let go and allow yourself to be open and immerse into what the show has to offer. If you’re looking for something off the beaten track, well, I have found your weekend plans! The play runs until the 21st December so book tickets now.

Who I am. What I do. Where I am going. My journey. 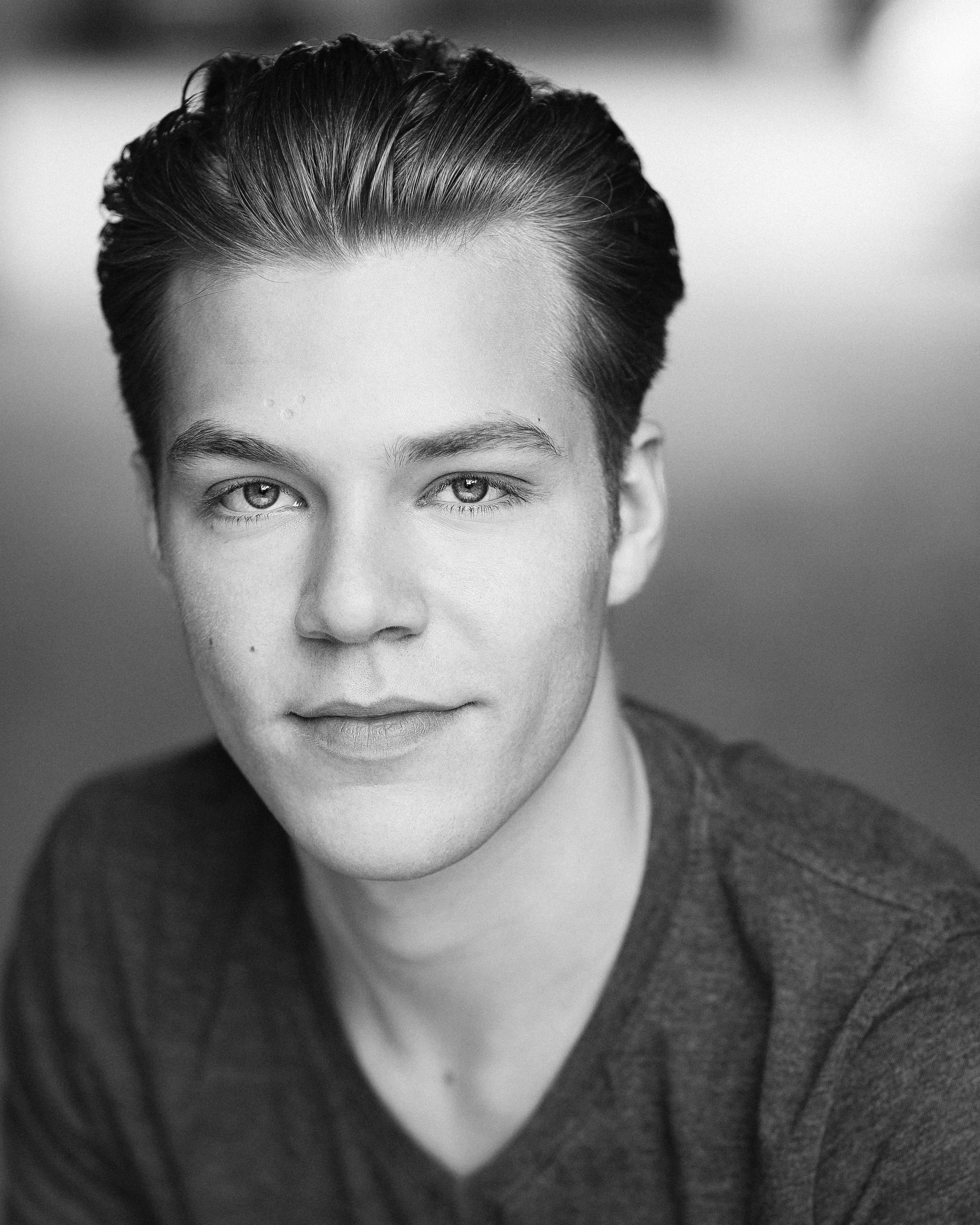 Hello! My name is Zachary Goldman. I am an acrobatic umbrella of all things creative. Born with a life calling to be an Actor, I am currently on a gap year training and learning for the rigorous, near-impossible four minutes of a drama school intake.

In my spare time, you can catch me crafting beautiful Latte’s, meditating to a guided YouTube video and talking about my foolhardy, forthcoming four month venture across India and South East Asia!

With my extravaganza of Oyster tapping in Central London, I am very fortunate to watch some of Britain’s finest performances in Arts & Culture. From graduate shows, to off West-End productions and tiny pub Theatres.

I’ll be starting to create a portfolio of reviews on the productions I’ve observed. Sharing my thoughts, recommendations on what I’ve seen and at heart, telling you whether it’s worth a ticket and your time!

I’m grateful to my beautiful thesaurus for helping me write the above. I am grateful to a lady named Tracy who guided me through the making of this website.  Thank you to all those who support me and I hope your vibrations rise and we can all take control of our beautiful day! Bye-bye.

The Merchant of Venice by LAMDA Review

I entered the space. It had already begun. I saw a lot of McDonalds, bums and penises. 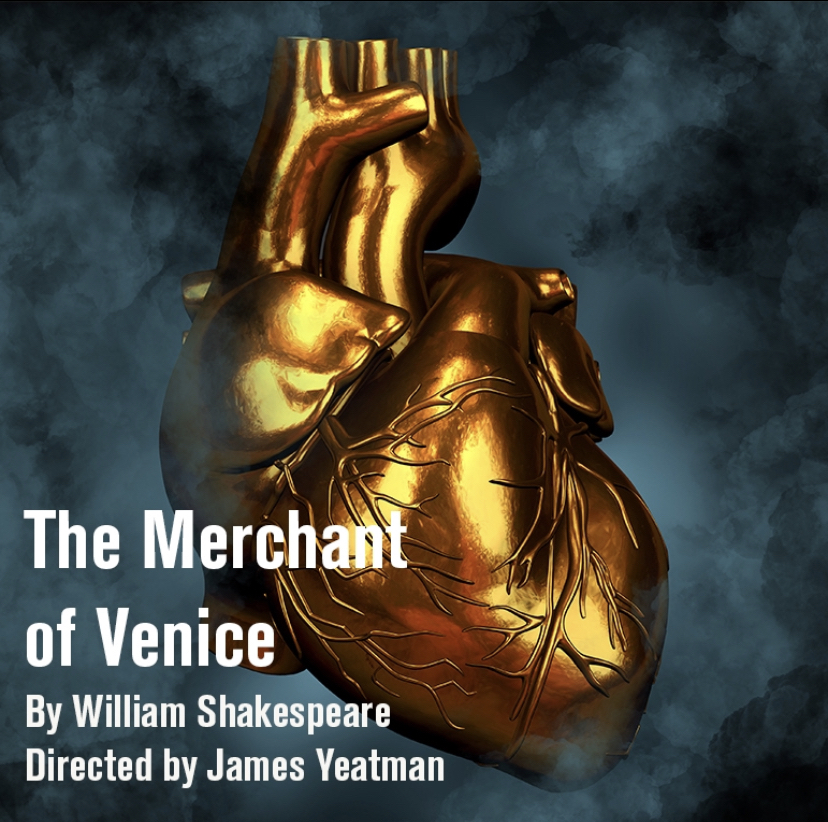 The school is said to be one of the world’s most rigorous, scrupulous and ambitious institutions of Actor training! The London Academy of Music & Dramatic Art (LAMDA) floods in an impressive number of applicants in each year. With a limited course intake of only as few as 30 people, there is no doubt about it; I was eager and enthusiastic to arrive at the school’s Sainsbury Theatre, Located in Barons Court. Walking into the box office, I was immediately attracted to the many headshots and CV’s that consumed the Theatre. I knew that their graduate show, ‘The Merchant of Venice’ directed by Art Director of Kandinsky Theatre company, James Yeatman was something not to be missed!

This ‘Tragicomedy’ classic of William Shakespeare exposes ideas of love, justice and true wealth. Shylock, a Jew living in the Rialto who is thought by some to be a victim and argued by others to be a villain, demands a pound of flesh over a deadly bond with Antonio. Antonio bounds his flesh to Shylock as a forfeit to failing to pay his loan back. how deep will the Venetian society glare their eyes into the fate of prominent merchant, Antonio? What will happen as Antonio has bound his life to Shylock for his friend’s pursuit of love?

As I walked into the performance space, I saw the actors preparing through various vocal warm-ups and group massage therapy as they began dressing into their boldly amusing costumes. As the lights came down, the stakes immediately rose. You can capture how the actors have explored their timeless characters of the 1590’s — to create a twisted version settled within modern-day society. The play had wonderful elements of believable performance.

However, having watched countless Shakespeare productions in the RSC, this production was something I found hard to grasp and makes sense of at times, perhaps this was due to the overuse of symbolism the director implemented. I thought that at times they were using style or techniques with no clear meaning behind them. Overall, I found there were moments of confusion within the style.

The performance history of the play has been largely dominated by the character Shylock. The directors diverse and disparate choice to cast Shylock as a female has not been done before to my knowledge. Played by US graduate Amelia Corrada, she thoughtfully infused the audience with Shylocks journey of humbleness, resentment and outright monstrosity. She did a marvellous job in managing to convey the acclaimed debate as to whether shylock is a victim or villain. I for one felt that Amelia plays shylock as a normal man with a black heart and twisted morals.

I was especially fond of the productions creative team. They constructed an innovative and mind-boggling set that made you question (in a good way!) almost everything. The lighting designer was slick to the tee; with smooth transitions, scenes were saturated with thoughtful colours and visuals to aid the intensity of moments.
The director’s choice in costume and props cleverly highlights the themes of gender, identity and religion. In addition, Yeatman masters his attention to detail on proximity and levels which work hand in hand with the set design, to present us with characters of power and status.

Overall, LAMDA’s Merchant of Venice was a play like something I had never seen before. It was a contemporary extravaganza where you could clearly see the work and commitment gone into the Actors. An easy-to-read guide of Shakespeare.
On the other hand, I did find myself out of touch at times, as the sheer context of the play was drowned in too many experimental choices by the director.
If experimental, fringe and an off-west end is your cup of tea I definitely recommend! If your someone who is interested in applying or studying as an Actor at Drama School, this play amongst the other season of graduate shows would be a great taste to see what a school might offer you. If you’ve seen the merchant of Venice before, expect the unexpected and be open to new ideas!