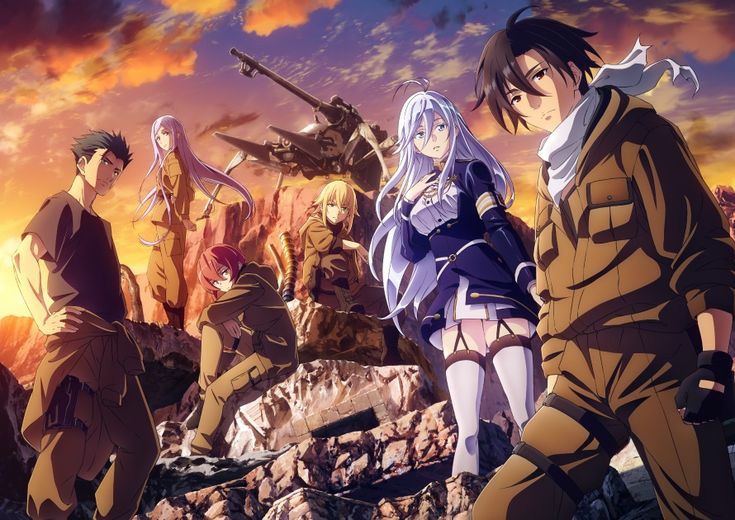 A War Without Casualties

The Republic of San Magnolia has long been under attack from the neighboring Giadian Empire's army of unmanned drones known as the Legion. After years of painstaking research, the Republic finally developed autonomous drones of their own, turning the one-sided struggle into a war without casualties-or at least, that's what the government claims.

In truth, there is no such thing as a bloodless war. Beyond the fortified walls protecting the eighty-five Republic territories lies the "nonexistent" Eighty-Sixth Sector. The young men and women of this forsaken land are branded the Eighty-Six and, stripped of their humanity, pilot the "unmanned" weapons into battle... 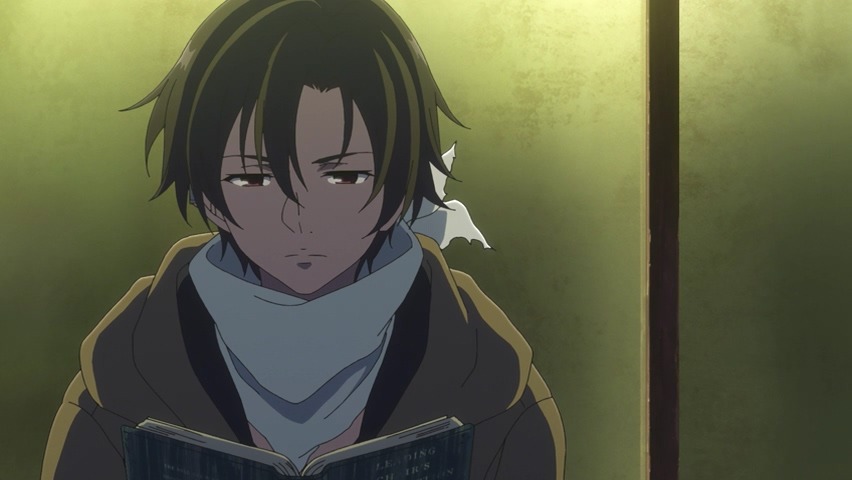 Shinei Nouzen (シンエイ・ノウゼン,, Shinei Nouzen?) is the field commander of Spearhead Squadron, as well as the highest ranking non-guest operations commander in the Eighty-Sixth Strike Package. His Personal Name is Undertaker.

Appearance
As a mixed Pyrope and Onyx, Shin has bloodred eyes and jet-black hair. His pale features and slender physique are characteristic of the Giadian Empire's nobles. He almost always wears a sky-blue scarf around his neck to conceal the jagged scar on his neck. As the Spearhead Squadron's leader, he wears a desert camouflage uniform scavenged from an abandoned Republic military depot.[16] He is described to be rather handsome, attracting the attention of a few of his female comrades.

By Run Through the Battlefront, he has switched to the Federacy's steel-colored panzer jacket uniform but retains his blue scarf, removing it only for official meetings.

Personality
Shin feels that it his responsibility to shoulder the deaths of his comrades. He had always been the last and only person left alive until he had met Raiden Shuga. Thus, even after meeting a companion that could survive along side him, he always felt it was his duty as the survivor to silently carry the tags of the fallen to his final destination.[7]

Shin has a strong desire to protect his companions, even if he sometimes does it in the wrong way. This is demonstrated in when he chooses to face the Shepherd alone to put his brother to rest, as well as when he forcibly takes control of the Spearhead Squadron's last Juggernaut and attempts to hold off the Legion so that the rest of his squadron can escape to Federacy territory.[19][9]

In contrast, he has a distinct lack of care for himself. He compares himself to the Legion, calling himself a ghost, aimless and wandering like the Legion that had lost their country.[20] Consequently, he often throws himself into dangerous situations without regard for his own safety, somehow surviving through luck and combat skill. This tendency grows worse in Run Through the Battlefront.

Shin's ability to hear the voices of the Legion places enormous mental strain on him even when he has become accustomed to listening to the constant wails of the dead. His responsibility to carry the names and memories of his fallen comrades also burdens his conscience. The weight of his responsibilities and the effects of his ability have contributed to his stoic nature and lack of mirth.

Shin is known to be an avid reader, reading various types of books to take his mind off of the voices of the Legion. He has a dismissive attitude towards maintaining the condition of his Juggernaut, an aspect of his that leads to many arguments with Chief Mechanic Lev Aldrecht.[21]

Reputation
Shin is known as the Reaper of the Eastern front, a practical legend among the Eighty-Six. Both a moniker of reverence and fear, those who were assigned in the same squadron as him dreaded their fate of certain demise, or accepted that they would die knowing Shin would carry on their memory. No one would survive longterm in a squadron with Shin present, no one except the one known as Wehrwolf.

Shin is often compared to a plague bringer or a prophet of death. His notoriety would spread from the word of his previous mechanics or squadmates which were transferred out of his squadron, such as Rito Oriya. His reputation would achieve a similar status in the central Republic military, due to stories of him breaking his Handlers and driving some to suicide through his ability to hear voices of the dead.

History
Born on May 19th in Republic Year 351, Shin lived with his family in the First Sector of the Republic before the war with the Giadian Empire began. It is implied he lived a sheltered life, surrounded by "only kindness and affection". He also appeared to have developed his extrasensory ability early on, hearing "voices that spoke without words" from his family.[20] He would often play with the daughter of his father's colleague, Henrietta von Penrose, whom Shin called Rita.[22]

Shin and his family were forced to relocate to an internment camp when the war began due to the Republic's discriminatory policies. Shin's father was first to enlist in the Republic military, accepting the Republic's promise that Shin and the rest of his family would have their rights restored in exchange for military service. Despite this, the Republic does not uphold its promise. Upon delivering the news of Shin's father's death, it informs Shin's mother that the military service was in exchange for only one person's citizenship. Continuing to trust the Republic, Shin's mother also enlists to protect her sons, leaving eight-year-old Shin and his eighteen-year-old brother Shourei in the care of an Adularia priest, a friend of the Nouzens who had resisted the Republic's policies and remained in the village-turned-internment-camp's church.[20]

Shortly afterward, Rei receives notice of his mother's death on the battlefield and an enlistment form for him, proving the Republic's promise to be a lie. Shin, to whom the concept of death was not yet comprehensible, implores Rei to explain why their mother would not be returning. Shin's pleas caused the grieving and frustrated Rei to snap and choke Shin in a fit of violent rage. Rei brings Shin to the brink of death before the priest intervenes and resuscitates him. Shin is left with a jagged scar around his neck as a reminder of his brother's hatred. The near-death experience also opens Shin's telepathic ability to a broader range of human consciousnesses, including those of the Legion, by temporarily experiencing the post-mortem collective consciousness of humanity. Rei avoids Shin after the incident and refuses to say farewell or even glance at Shin when he enlists and leaves Shin behind with the priest.[20]

Four years after Rei's enlistment, Shin hears his brother's voice among the laments of the Legion and realizes that Rei is dead. On that day, Shin enlists with the military and becomes a Processor.[20]

Fragmental Neoteny
Brand
Shin had been on the battlefield for almost a year. His captain, Eiju?, suggested that he start considering his personal name and mark. Shin was dismissive of the idea, as he thought it was a pointless endeavor. The captain suggested the name Báleygr, due to his flame colored eyes, but Shin didn't think it fit him.

After a sortie in which the entire squad save for Shin had perished, he had come across a destroyed Juggernaut of an unknown squadron. The pilot had already decomposed within the cockpit. While his promise was to carry on the deaths of his squadmates, he felt that it was his duty to carry this stranger's mark as well. The personal mark painted on the unit, a headless skeleton wielding a longsword, resonated with him. After burying the bones and collecting the marks of his squadmates, he returned to the base. He requested the chief mechanic to paint the mark on his own Juggernaut, replacing the longsword with a shovel. Shin officially took up the personal name of Undertaker, the sole survivor that dug the graves of his comrades.

Triage Black Tag
In his fifth year of deployment, February of RY 367, Shin and his squadron are combined with veteran remnants of other squadrons from the Eastern Front to form Spearhead Squadron, with Shin leading as captain. Characteristic of Shin's squadrons, Spearhead does not patrol the battlefront for the warning on Legion attacks, instead of relying on Shin's ability to detect the Legion. Despite the Processors' years of experience and the advanced awareness of the Legion, Spearhead soon takes losses. By the time Spearhead receives their new Handler, three Processors have fallen in action: Matthew, Mina, and Kujo

I. 〈 序文, Foreword 〉
Admin speaking, The less talkative I am the less human want to interact, I cant be bubbly
Feel free to interact, let's be friends

III. 〈 言語, Language 〉
i'm going to use english & bahasa as my main language since I can't speak other languages and also maybe I'll use the native languages of the characters

V. 〈 免責事項, Disclaimer 〉
photos and resources such as overlays, textures, fanarts, & filters i used on this account belong to their perspective owner. i only do the edit