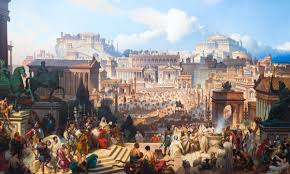 Who are the Romans?

The Roman Empire was the post-Republican period of ancient Rome. As a polity it included large territorial holdings around the Mediterranean Sea in Europe, Northern Africa, and Western Asia ruled by emperors.

Roman identity in Western Europe survived the fall of the Western Roman Empire in the 5th century as a diminished but still important political resource. It was only with the wars of the eastern Emperor Justinian I, aimed at restoring the western provinces to imperial control, that "Roman" began to fade as an identity in Western Europe, more or less disappearing in the 8th and 9th centuries and increasingly being applied by westerners only to the citizens of the city of Rome. The city itself continued to be important to Western Europeans but this importance stemmed from Rome being the seat of the Pope, not from it once having been the capital of a great empire. However, in the primarily Greek-speaking eastern empire, often called the Byzantine Empire by modern historians, Roman identity survived until its fall in 1453 and beyond, despite some interruption of the Empire's existence during the Frankokratia and ensuing rise of the Hellenic-Orthodox national consciousness against the Crusaders of Latin West, with the Roman identity in the east undergoing transition from a universal/multiethnical one to a precursor of a Greek nationalistic one.